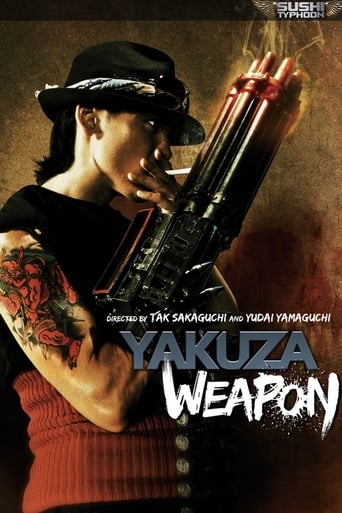 After four years overseas, Shozo returns to Japan to avenge his yakuza boss who was assassinated by his own treacherous top man, Kurawaki. The resulting battle leaves both men severely injured, and Shozo awakens in a mysterious medical facility to find his arm replaced with an M61 Vulcan cannon and his leg replaced with a rocket launcher. Meanwhile, Kurawaki has been fitted with mechanical augmentations of his own. Get ready for the second round.

After his father is killed| a young yakuza comes back to Japan for revenge - and a machine gun for an arm. Downloading Seeding Yakuza.Weapon.2011.JAPANESE.720p.BluRay.H264.AAC-VXT from to 0 peers.
of
↘0 b/s / ↗0 b/s
Read our blog post about Streaming Torrents From Your Browser