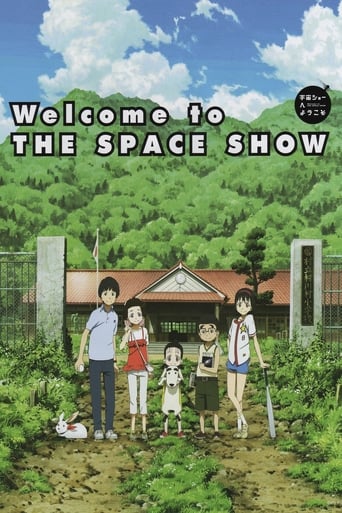 Five children save the life of a dog-like alien while at a self-run summer camp. He attempts to reward them by taking them to an alien colony on the Moon. Events take a turn for the worse when his report on that attack that injured him causes passage from the Moon to the Earth to be banned, and children are stranded in space. The children need to find a way back home before camp ends and their parents discover that they are missing. They also have to avoid the poachers that injured their alien friend, and now seem to be stalking them all.

A tiny mountain village in a remote woodland region. Five primary school kids have come together in this idyllic spot in order to spend their summer holidays ata camp. At first the children enjoy carefree days amidst unspoiled nature far away from adult supervision. But their life changes dramatically when they comeacross what they believe to be a small dog| badly in need of help. The creature - known as Pochi - turns out not to be a dog at all but an alien on an importantmission. It seems there is a mysterious substance on earth that is coveted throughout the universe. Pochi had almost found it but was so badly injured during afight that he had to give up his search. Thanks to the children's help| the alien survives - and decides to reward them generously. "Where would you most liketo travel?" is the question Pochi puts to his rescuers. Their answer is prompt| if vague: "As far as possible!" Pochi suggests they try the moon first of all|and so| the alien whisks away the kids to... Downloading Seeding Welcome.To.The.Space.Show.2010.DUBBED.720p.BluRay.H264.AAC-RARBG from to 0 peers.
of
↘0 b/s / ↗0 b/s
Read our blog post about Streaming Torrents From Your Browser