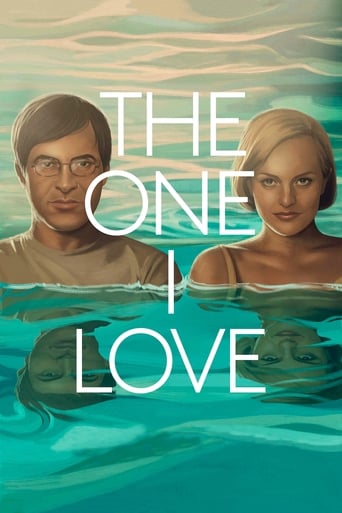 On the brink of separation, Ethan and Sophie escape to a beautiful vacation house for a weekend getaway in an attempt to save their marriage. What begins as a romantic and fun retreat soon becomes surreal, when an unexpected discovery forces the two to examine themselves, their relationship, and their future.

A troubled couple vacate to a beautiful getaway, but bizarre circumstances further complicate their situation.

> A unique way to let go of your marriage problems! This is a slow start, but the second half makes it worth a watch. You better know nothing about the film, just have it and enjoy your time. Because that was the case for me and then I found it a good one. I don't know this director, but Mark Duplass was doing such kind of unique concept small films. So there's no surprise, except I did know I would end up liking it very much. When it comes to the film theme, kind of resembles 'Coherence'. The whole film revolves around a married couple, except in the beginning. So it is a minimal cast film that is set in a remote place villa. As their therapist's instruction a couple who are on the edge of losing their marriage, tries a weekend getaway to patch the differences. But end up encountering the strange events that pleases them more than what they've expected. When they begin to realise the reality, comes the trouble to fix it once for all. The third act was amazing. The pace keeps getting better and the tension in the story simply creates enough curiosity about the ending. But the conclusion was very basic and guessable. I liked the honest than too much fancy. Still the viewers look for the answers regarding how it ended which is kind of a wide open for the discussions. I love modern sci-fi dramas, especially in the last one decade, I have been enjoying them a lot, which are highly intelligent yet casually narrated on the screen that anybody can understand easily. If you had liked films such as 'Coherence', 'Another Earth', 'Her', 'Melanchony' et cetera, then surely would have a good time with it. 7/10

This quirky movie is worth a look. Some suspension of disbelief is required. Script is OK but the acting is pretty solid, though having said that, more range in terms of characters' possible selves would have given it more edge. Takes about 20 minutes to take off. No idea what the R rating is for. 15 maybe but the R is hardly justified.

Some Guy Name 5 years ago

6.5, so above average. I'd recommend never reading the reviews for this movie before you watch it. I barely read the description, because I was told "the less you know, the better", and it's extremely important for this movie. I think it'll even be boring upon a second watch, now that I don't have to think and guess as I had upon the first. So, major spoilers. You have been warned. I have many complaints and many great things to say about this movie, but like the miserable couple in it, I will focus on the bad parts. So, what I gather from the premise is, there are always one couple in the house/quest house that can't leave, because their relationship is not strong enough. And, when some new couple come visit,(guided by some psychopath Doctor Who-ish therapist) the trapped couple tries to switch places with them. They do so, by taking on an idealized form of the new couple, the female seducing the male and so on... And then, when the new couple's relationship is weakened because the trapped couple's fake personalities appears to be so much more awesome than their partner's, the trapped couple can leave, making the "new" couple become the trapped ones instead. This left so many questions, that will frustratingly never be answered. 1) How do the trapped couple shape shift into the idealized forms of the other couple? Is it magic? Quantum mechanics? I don't know, and neither does the movie. 2) So at the end, the male lead realizes that he has escaped with the idealized version of Moss by mistake. He decides to just roll with it, since his original wife coldly and knowingly decided to stay with his fake version - I totally get that. What I don't get is the fake Moss-character's decision to stay with him after she escaped. What's in it for her? She must've gone insane trying to keep up the idealized act forever, given that she is also a real person, who had another life before.3) Related to the one above, are the shape shifting permanent? Do they have permanent fake personalities as well, never being able to reclaim the life they had before? Are they forced to do this, simply because they wanted a better relationship?! 4) What point is the therapist trying to make? After all, all of the couples entering the house/guest house, will have their relationship destroyed, and then be forced to shape shift into a stranger's idea of perfection. They don't get anything fixed, only cruel punishment awaits.Some people say this movie would've been better as a short. I say this movie would've been better as a horror. It was, in fact, recommended to me, because I was searching for a scary movie(damn you, Metafilter, and your ever so tame idea of "scary stuff"). I'll never forget the creeped out feeling I got when I saw Kate Moss holding a babushka, realizing that this would be about doppelgängers, but sadly not knowing that it was intended to be a drama-mystery- comedy. Thus, I sat there waiting in glee for some revelation of the terrible creatures behind the perfect facades, or some build-up to an incredibly freaky psychological horror. They could've done so much with this! I wish they were aliens or something, with a slow, scary revelation of creepy habits, that would make the couple regret their decisions. Or maybe they could've just played around with the surreal feeling of being with your partner, but not really, and the surreal states and psychology that follows living with a fantastic being, that knows it's not real. Yet the simple concept of the movie stayed as minimalist as it was when it begun. Shame.And one last thing. The Kate Moss-character was surprisingly, well, stupid - the fact that she turned out to be "right" in the end didn't prevent me from strongly disliking her, in all her "but if it feeeeels right"- pretensions. I actually thought what she did was worse than the male character cheating, but most of all, I just couldn't connect with her. She lacked both curiosity and fear in a way I found unbelievable, and I actually understood her shape shifter-version much better.

Mark Duplass and Elizabeth Moss are married and their marriage is on the rocks. Duplass cheated, and they are trying to make things work again. They are seeing therapist Ted Danson, who suggests they take a weekend for themselves at an out of the way resort he knows of. They go and discover that if either of them enter a small guest house on the premises by themselves, another, slightly better version of the other one is in the house. This is a great premise in search of a better movie. What's here is not bad, and in fact, their initial reactions to the set up is quite good. It's the last act that is really not up to it. The film doesn't let the premise remain a mystery. It explains enough to try to ground the film in reality without explaining enough to really make any sense. It's too bad because both Moss and Duplass are great, and what the film does well,in particular grappling with the idea of what you may have lost as the years go by, it does really well.

Downloading Seeding The One I Love (2014) from to 0 peers.
of
↘0 b/s / ↗0 b/s
Read our blog post about Streaming Torrents From Your Browser