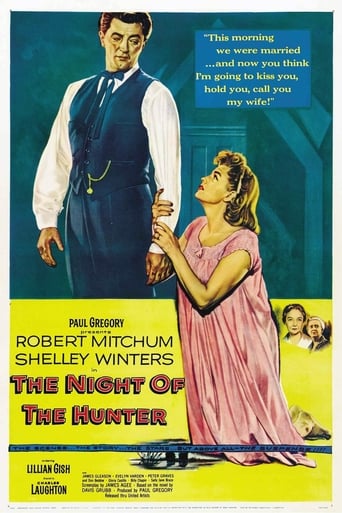 In the Deep South, a serial-killing preacher hunts two young children who know the whereabouts of a stash of money.

It's the Great Depression. In the process of robbing a bank of $10,000, Ben Harper kills two people. Before he is captured, he is able to convince his adolescent son John and his daughter Pearl not to tell anyone, including their mother Willa, where he hid the money, namely in Pearl's favorite toy, a doll that she carries everywhere with her. Ben, who is captured, tried and convicted, is sentenced to death. But before he is executed, Ben is in the state penitentiary with a cell mate, a man by the name of Harry Powell, a self-professed man of the cloth, who is really a con man and murderer, swindling lonely women, primarily rich widows, of their money before he kills them. Harry does whatever he can, unsuccessfully, to find out the location of the $10,000 from Ben. After Ben's execution, Harry decides that Willa will be his next mark, figuring that someone in the family knows where the money is hidden. Despite vowing not to remarry, Willa ends up being easy prey for Harry's outward ... The only film directed by the great English actor Charles Laughton, "The Night of the Hunter" is a brilliant allegory about the battle between good and evil. The film failed upon its release but is now considered a classic. Robert Mitchum has never been better as the malevolent "preacher" who marries the hapless Shelley Winters. Mitchum had been in prison with Winters husband and knows there is money to be had from a robbery the deceased husband committed, but where is it? Though Shelley falls under Mitchum"s twisted religious zeal, her children a little boy and girl instinctively know this man is bad, bad, bad. Spoiler alert: Shelley Comes to a watery end and the children must flee from Mitchum who has discovered the money is hidden in little Pearl's doll. After an arduous journey mainly by boat (the Ohio river?) John and Pearl come to rest in the saintly arms of the magnificent Lillian Gish. But Mitchum is relentless in his pursuit and that is when the eternal battle between good and evil is fought one more time. I will not reveal which side prevails but let's just say for an old broad Lillian is a formidable opponent. A film I saw as a young boy it left an impression on me that was powerful. A deeply disturbing yet uplifting movie "Night of the Hunter" is not to be missed. This is Gummshoe signing off with two fists up for "Night of the Hunter."

Laughton crafts a nightmarish fairytale that stands up now as a true masterpiece. A religious maniac marries an idiotic widow and mother of two children in the hope of finding out where the $10,000 is hidden that the now executed husband and father garnered from a robbery. Upon release back in 1955, the critics of the time kicked this first directorial effort from Charles Laughton to such a degree he never directed again. Watching the film now and observing the tide of praise for it as each year goes by, one can only hope that those critics were rounded up and sent to a faraway island to learn about how to view with open heart. The Night Of The Hunter is to me quite simply one of the greatest films ever laid down on the screen. Firstly you have to ask yourself exactly what genre the film belongs to? That alone should lead you to find out that the film is something different, even unique, because it covers so many bases. Perhaps that is what the critics back then couldn't quite fathom? Is it Crime? Is it a Thriller? Horror, Drama, Noir, even a terrifying mother goose fairytale (that last one was Laughton's terming of his masterpiece), truth is, is that it's a multitude of earthly traits masquerading as a good versus evil parable. The work on the film is as good as it gets, the direction from Laughton is sublime, his visual style alone makes the film a feast for the sharp eye connoisseur. Observe some of the cutaway sets, take in the expressionist use of shadows, an underwater sequence that is gorgeous yet terrifying at the same time. I dare you to stop the hairs on your neck standing up on end as the silhouette of Mitchum's evil preacher Harry Powell looms large over the children at bedtime. The film is full of striking images that in themselves are telling the story, witness the pursuit of the children by Powell, the children's river journey is all dreamy and calm, rabbits, frogs and spiders all are prominent to give the feeling that the kids are safe, cut to Powell all in black, cloaked in evil, always one step away from his prey, perhaps a devil in priests attire? The acting is top draw, Mitchum (in a career making role) plays it perfect, evil personified mixed with gentle panto fusion at just the right times. Lilian Gish, in what surely has to be one of the great feminine roles of all time, is precious, quite simply precious, while the children are a believable delight because Laughton has got us viewing this uncertain world through such untainted eyes. Crowning it off is the cinematography from Stanley Cortez, I can only describe it as bleakly beautiful, it impacts on the eyes as much as the head as this truly majestic piece of work unfolds. If you don't see this as a masterpiece then I urge you to watch it every year until you do. Because when it hits you, that bit that you just didn't get, it's the point when you realise why you love cinema after all. 10/10 in every respect.

I still hear the lullaby singing sweetly in my head, like a hazy, haunting dream that won't go away.From the opening scene of the beautiful Lillian Gish and her children, watching over the world in a starry sky, this movie just sinks you into a mesmeric fairy tale land. The camera takes us down in one sweeping move to a scene of children playing, a hot sunny day, and right to the feet of a murder victim. And that sweet music turns on us like a twisted nightmare as the scene chases after a car speeding along a country road to find one of movies worst villains. Charles Laughton, in sadly his one and only stab at directing, created a masterpiece of horror with Night of the Hunter. The moments of sugar coated sweetness only make this movie even more disturbing as you wonder how the two can inhabit the same world. Mitchum is terrifying. More-so in a town full of simple folk ready to match him up with the local widow who needs a father for her lit'le n's. Its like he's walked into the middle of a Frank Capra movie and he's going to do what he wants to. This is not just a great horror movie, but an artist achievement to rival Welles' Kane. The river scene is one of many moments of pure visual splendor. And that sound track just keeps drifting alone, as if trying to coax you into slumber, till the singing madman of your nightmares comes over the hill, relentless. "Chil-dren, Come along now"You don't watch this movie, it watches you. ...Hush, Lit'le ones, Hush.

It's a shame Charle Laughton, the distinguished actor, didn't direct more films. As he clearly indicates with "The Night of the Hunter", he had a rare gift for guiding a production into achieving greatness. This film, which didn't receive the attention it got when it was released, has turned out to be something discerning movie fans saw from the start, a classic.Charles Laughton was basically a man of the theater, then came the movies, but he was at heart someone who was equally at ease working on the stage, or performing in front of a camera. Mr. Laughton undertook to direct this screen play written by another distinguished American writer and critic, James Agee, based on the David Grubb's novel.The result is a magnificent film about to what extreme a man will go in order to steal from two young and innocent children something their father had left for them in trust. The evil character of Harry Powell, a charlatan preacher taking advantage of poor and unsophisticated country folk, is one of the best creations in the novel. Harry Powell doesn't care what he must do to get his hands in the money. He marries the children's mother, a widow who was hoping for some happiness in her life, only as part of his overall scheme of things.The film is a poetic account of the story with great emphasis on the kindness the children receive at the end from Rachel Cooper, a woman with a heart of gold who took John and Pearl into her home when they needed it.Robert Mitchum is the evil Harry Powell. It's without a doubt, one of Mr. Mitchum's best screen work. As guided by the director, the actor gives a performance that still surprises whoever watches the film for the first time. Shelley Winters plays Willa, the widow who can't sense the danger connected to the man she marries. Lillian Gish is another luminous presence in the film because she projects no-nonsense kindness and sweetness toward the children she takes into her home.The film also is enhanced by the brilliant black and white cinematography by Stanley Carter. The film still shows a pristine look fifty years after it was released. Also, the musical score of Walter Shumann adds another layer in the film's texture."The Night of the Hunter" is ultimately a work of art that moves the viewer because of the tremendous work its director, Charles Laughton, gave to the movie.

I was lucky enough to see this in a cinema with a restored print. I had previously caught a snatch of it while channel surfing cable TV, and saw enough in about 30 seconds to realise that this was worth watching through if I got the chance.I could barely speak at the end of the film. Pauline Kael called it one of the scariest movies ever made, and she was absolutely right. Robert Mitchum becomes the embodiment of evil, and his pursuit of the children is so relentless, and so menacing, that it becomes impossible to believe that they can escape. The images are brilliant; there's a depth to black and white that colour somehow lacks, and it is used superbly here to create a sense of brooding terror.I didn't mind the homily at the end. Like everything else in the film, it is done with utter conviction, and this makes it work. Charles Laughton saw it as the indispensable conclusion to the film, and the strength of his belief makes it indispensable.The images are so much part of the film that it must lose a great deal on the small screen, although my minimal exposure to it in that environment showed that it was still well worth watching, but if you get a chance to see it in a cinema, jump at it.