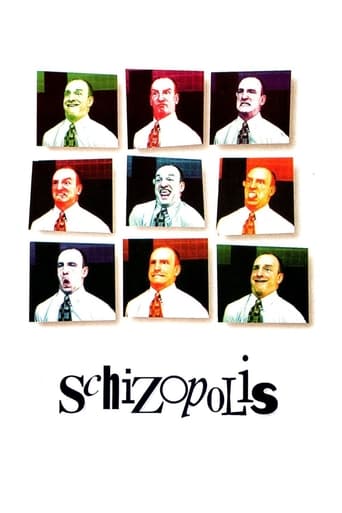 A man works for the unpleasant guru of a Scientology-like movement.

Fletcher Munson is a lethargic, passive worker for a Scientology-like self-help corporation called Eventualism. After the death of a colleague, he is promoted to the job of writing speeches for T. Azimuth Schwitters, the founder and head of the group. He uses this as an excuse to be emotionally and romantically distant from his wife, who, he discovers, is having an affair with his doppelganger, a dentist named Dr. Jeffrey Korchek. As Munson fumbles with the speech and Korchek becomes obsessed with a new patient, a psychotic exterminator named Elmo Oxygen goes around the town seducing lonely wives and taking photographs of his genitals. 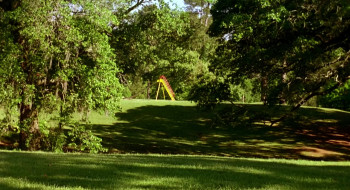 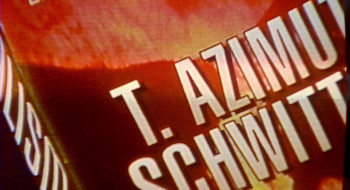 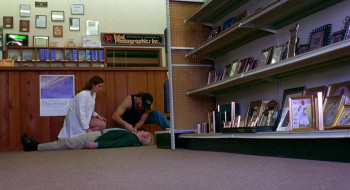 The reason is it is absolutely brilliant. In need of artistic renewal, Steven Soderbergh threw everything he could think of into this self-financed feature and the results are scattershot, inscrutable, unfathomable and -- above all else -- hilarious. Veering from biting social commentary to clever wordplay to a withering parody of Scientology, this film isn't the sort of thing one should rent unless you want to give your brain a workout.Soderbergh has said that this was his attempt to pay homage to the "freewheeling" style of Richard Lester. Whether he achieves that or not is open to debate, but he certainly managed to create a one-of-a-kind film experience. Too bad few people ever got the chance to see it on the big screen.In the immortal words of Elmo Oxygen: "I believe -- so strongly -- in mayonnaise." Words to live by. I know I do.

The first time I saw this film I was entertained and mildly confused by what I had just witnessed, it primarily represents a satiric look at modern life Pre Office Space, but saying just that does not do the picture justice. The combination of surrealism, satire and general creativity make this film worth while and most importantly worthy of multiple viewings. At times it feels as though it is being weird for the sake of weird but remains to peak curiosity. Some very funny situations and lines. Not for everyone, but for those looking for something different and willing to keep an open mind this is an excellent, original film. If you want loud bangs and shiny things, watch Soderberghs other films like Ocean 11, 12, 13, 14, 15, 16 etc.

From the prologue I instantly thought I understood the tone that Steven Soderbergh- writer, director, cinematographer, possible pornographer, and double-actor on Schizopolis- was going for: pure absurdism, not just with how the prologue is worded (as the most important film experience of all time, the "full completed version"), but how he goes between all the different lenses like a young film student checking out the gears on a Bolex. But it's always a tricky thing going into a Soderbergh "experiment", and that it could be a mish-mash like Full Frontal (I've yet to see Bubble). And, in all truth, it is a mish-mash. It tells a coherent story only in that there's maybe two (or three) stories that seem to make any sense, but is scattered around scenes and freewheeling camera moves and editing tricks and music that come closest to that oft-mentioned critic term "off-beat". And a lot of the time it seems to be so personal to Soderbergh (real life ex-wife playing ex-wife, plus what may be his real kid playing Brantley's daughter), and so unconscionably irreverent, that it dares to run off the tracks any minute.But it's this fully realized move to just be silly and strange, to make just random moments of wild satire (Rhode Island sold as a shopping mall, "Well, at least we didn't sell it to the f***ing Japanese", and a man randomly getting caught up in a straight jacket by fellows from a mental hospital), more well-rounded jabs at the drudgery and pointless meandering of everyday white-collar work life (is there a spy, or a mole, who cares if there's masturbation?), and statements just abstracted as if done sort of by a spontaneous idea in the editing room (title cards quoting a page in the script?), that makes it such a daring work of ludicrous intentions. This isn't a filmmaker trying to make an innovative and possibly important film like Traffic, or even a fun mainstream romp like Ocean's Eleven. In fact, it's seeing the opening prologue, and seeing how the style takes off right away (the title for the film on the shirt of a naked guy running away!) it sets off wonderful irony at every turn.Not that Soderbergh isn't being self-indulgent. In fact, I'm sure that's why there's something of an honesty to his going head-long into his own personal crises of dealing with a relationship or marriage, and throwing caution to the wind by making the emotional problems actually quite real while obfuscating them with some truly goofy vignettes. It's almost like directorial therapy: let the actors improvise, let it all be loose, and even have a truly warped storyline involving an exterminator, really an actor looking for motivation and a written scene (ha), yet having in many instances moments of confession. Even if one might not know some of the circumstances surrounding Soderbergh's first marriage (it's detailed in the book Rebels on the Backlot), it feels like it's coming from the heart a good lot of the time, which uplifts the comedy. A running gag late in the film, as certain scenes from earlier with the perfectly dead-pan Soderbergh and Brantley are repeated, has Soderbergh being dubbed over in Japanese, French, and Italian, though in scenes that involve break-ups, awkward sexual tension, and a reconciliation.This is not to say that Soderbergh isn't also more devilish than he's ever since been with his innuendo- make that outright hilariously immature sexual comedy- and it's amazing to see Soderbergh read a 'love letter' he's written to his "Attractive Woman #2", describing his profession of emotions in very graphic ways. And if Soderbergh does some strange things to surprise as the only time he's starred, let alone acted, in one of his films (the scene where he's in the bathroom making faces at the mirror is one of those pure moments in absurd cinema that speaks to the success of paying homage to Richard Lester movies), his going for broke stylistically pays off too. Or doesn't, depending on how one can take the mix and match of film stocks used from grainy 16mm to the usual 35mm, jagged hand-held racing after the exterminator man beating up on a man and woman, extreme fast-motion film-speed, perfectly composed images like a boy in right field missing a baseball, and even documentary style in the scenes with T. Azimuth Schwitters. On top of the dialog being continuously crazy and self-conscious (what's that film crew following along?), it's possibly the best, or at least most fun, that Soderbergh has to offer as an independent filmmaker.So see it at your own risk, definitely check out the trailer beforehand to get an idea of what's at hand (if the poster wasn't sign enough what a tailspin one can expect to get into), and if one is already a fan, if only in the guilty pleasure sort of way as I know I am, do check out the Criteron DVD for Soderbergh "interviewing" Soderbergh commentary, including the story how the deal for David Lean to direct two years after his death fell through (damn Showtime channel)!