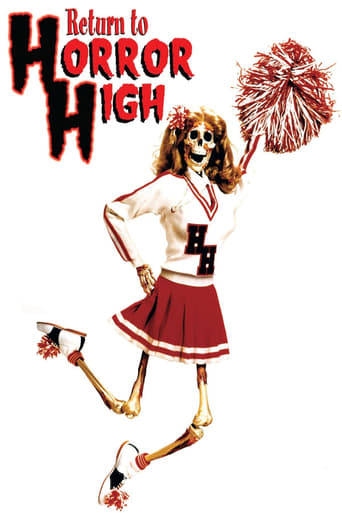 A few years ago, a mysterious serial-killer caused panic on Crippen High School. The killer was never caught. A movie company, Cosmic Pictures, has decided to make a feature movie about these events - on location, at the now abandoned school. Since members of cast and crew disappear without a trace, it seems as if history is repeating itself...

In the early 1980s, a series of gruesome murders occurred at Crippen High School. A few years later, a film crew uses the now-abandoned Crippen High as the setfor a film. But an uninvited guest makes an appearance on the set. _**Fun low-budget high school slasher parody with not enough laughs**_ Cops (e.g. Pepper Martin & Maureen McCormick) arrive upon the bloody aftermath of a massacre at a high school where a film is being made. The story switches back to tell how the massacre happened. The cast includes Lori Lethin, Brendan Hughes, Alex Rocco, Andy Romano and Scott Jacoby. “Return to Horror High” (1987) is a fun slasher parody with great mid-80’s ambiance (styles, mullets, etc.) that should be enjoyed by those involved in horror filmmaking (since the story focuses on the making of a slasher at the high school). A young George Clooney shows up for about 10-12 minutes in the first act. Meanwhile cutie Lori Lethin does well in three roles. Unfortunately, there aren’t enough laughs and some of them are really lame. Plus the film bogs down in the second half with filler material involving the two main characters and their search of the school (Brendan Hughes & Lori Lethin). The third-rate vibe doesn’t help. Still, it’s amusing mindless mid-80’s satire. The movie runs 1 hour, 35 minutes, and was shot at Clark Magnet High School, La Crescenta, California. GRADE: C-

Downloading Seeding Return.to.Horror.High.1987.1080p.BluRay.x265-RARBG from to 0 peers.
of
↘0 b/s / ↗0 b/s
Read our blog post about Streaming Torrents From Your Browser