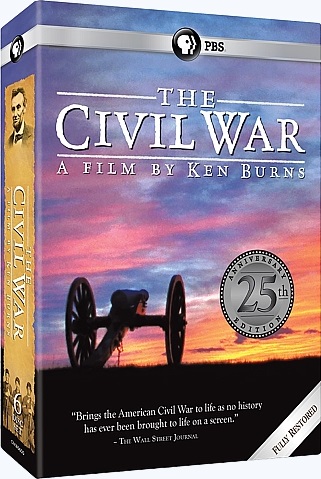 The Civil War was fought in 10,000 places, from Valverde, New Mexico, and Tullahoma, Tennessee, to St. Albans, Vermont, and Fernandina on the Florida coast. More than 3 million Americans fought in it, and over 600,000 men, 2 percent of the population, died in it.

American homes became headquarters, American churches and schoolhouses sheltered the dying, and huge foraging armies swept across American farms and burned American towns. Americans slaughtered one another wholesale, right here in America in their own cornfields and peach orchards, along familiar roads and by waters with old American names.

In two days at Shiloh, on the banks of the Tennessee River, more American men fell than in all the previous American wars combined. At Cold Harbor, some 7,000 Americans fell in twenty minutes. Men who had never strayed twenty miles from their own front doors now found themselves soldiers in great armies, fighting epic battles hundreds of miles from home. They knew they were making history, and it was the greatest adventure of their lives.

The Civil War has been given many names: the War Between the States, the War Against Northern Aggression, the Second American Revolution, the Lost Cause, the War of the Rebellion, the Brothers' War, the Late Unpleasantness. Walt Whitman called it the War of Attempted Secession. Confederate General Joseph Johnston called it the War Against the States. By whatever name, it was unquestionably the most important event in the life of the nation. It saw the end of slavery and the downfall of a southern planter aristocracy. It was the watershed of a new political and economic order, and the beginning of big industry, big business, big government. It was the first modern war and, for Americans, the costliest, yielding the most American fatalities and the greatest domestic suffering, spiritually and physically. It was the most horrible, necessary, intimate, acrimonious, mean-spirited, and heroic conflict the nation has ever known.

Beginning with a searing indictment of slavery, this first episode dramatically evokes the causes of the war, from the Cotton Kingdom of the South to the northern abolitionists who opposed it. Here are the burning questions of Union and States' rights, John Brown at Harper's Ferry, the election of Abraham Lincoln in 1860, the firing on Fort Sumter and the jubilant rush to arms on both sides. Along the way the series' major figures are introduced: Abraham Lincoln, Frederick Douglass, Robert E. Lee, Ulysses S. Grant and a host of lesser-known but equally vivid characters. The episode comes to a climax with the disastrous Union defeat at Manassas, Virginia, where both sides now learn it is to be a very long war.

1862 saw the birth of modern warfare and the transformation of Lincoln's war to preserve the Union into a war to emancipate the slaves. Episode Two begins with the political infighting that threatened to swamp Lincoln's administration and then follows Union General George McClellan's ill-fated campaign on the Virginia Peninsula, where his huge army meets a smaller but infinitely more resourceful Confederate force. During this episode we witness the battle of ironclad ships, partake of camp life, and watch slavery begin to crumble. We meet Ulysses S. Grant, whose exploits come to a bloody climax at the Battle of Shiloh in Tennessee. The episode ends with rumors of Europe's readiness to recognize the Confederacy.

This episode charts the dramatic events that led to Lincoln's decision to free the slaves. Convinced by July 1862 that emancipation was now morally and militarily crucial to the future of the Union, Lincoln must wait for a victory to issue his proclamation. But as the year wears on, there are no Union victories to be had, thanks to the brilliance of Stonewall Jackson and Robert E. Lee. The episode climaxes in September 1862 with Lee's invasion of Maryland. On the banks of Antietam Creek, the bloodiest day of the war takes place, followed shortly by the brightest: the emancipation of the slaves.

The nightmarish Union disaster at Fredericksburg comes to two climaxes that spring: at Chancellorsville in May, where Lee wins his most brilliant victory but loses Stonewall Jackson; and at Vicksburg, where Grant's attempts to take the city by siege are stopped. During the episode we learn of fierce Northern opposition to Lincoln's Emancipation Proclamation, the miseries of regimental life and the increasing desperation of the Confederate homefront. As the episode ends, Lee decides to invade the North again to draw Grant's forces away from Vicksburg.

5)  The Universe of Battle

This episode opens with a dramatic account of the turning point of war: the Battle of Gettysburg, the greatest ever fought in the Western Hemisphere. For three days 150,000 men will fight to the death in the Pennsylvania countryside, culminating in Pickett's legendary charge. This extended episode then goes on to chronicle the fall of Vicksburg, the New York draft riots, the first use of black troops, and the western battles at Chickamauga, Georgia and Chattanooga, Tennessee. The episode closes with the dedication of a new Union cemetery at Gettysburg in November, where Abraham Lincoln struggles to put into words what is happening to his people.

6)  Valley of the Shadow of Death

Episode six begins with a biographical comparison of Ulysses S. Grant and Robert E. Lee and then chronicles the extraordinary series of battles that pitted the two generals against each other from the wilderness to Petersburg in Virginia. In 30 days, the two armies lose more men than both sides have lost in three years of war. With Grant and Lee finally deadlocked at Petersburg, we visit the ghastly hospitals north and south and follow General Sherman's Atlanta campaign through the mountains of north Georgia. As the horrendous casualty lists increase, Lincoln's chances for re-election begin to dim, and with them the possibility of Union victory.

The episode begins with the presidential election of 1864 that sets Abraham Lincoln against his old commanding general, George McClellan. The stakes are nothing less than the survival of the Union itself: with Grant and Sherman stalled at Petersburg and Atlanta, opinion in the North has turned strongly against the war. But 11th-hour victories at Mobile Bay, Atlanta, and the Shenandoah Valley tilt the election to Lincoln and the Confederacy's last hope for independence dies. In an ironic twist, poignantly typical of the Civil War, Lee's Arlington mansion is turned into a Union military hospital and the estate becomes Arlington National Cemetery, the Union's most hallowed ground.

War is All Hell

The episode begins with William Tecumseh Sherman's brilliant march to the sea, which brings the war to the heart of Georgia and the Carolinas and spells the end of the Confederacy. In March, following Lincoln's second inauguration, first Petersburg and then Richmond finally fall to Grant's army. Lee's tattered Army of Northern Virginia flees westward towards a tiny crossroads town called Appomattox Court House. There the dramatic and deeply moving surrender of Lee to Grant takes place. The episode ends in Washington where John Wilkes Booth begins to dream of vengeance for the South.

9)  The Better Angels of Our Nature

This extraordinary final episode of The Civil War begins in the bittersweet aftermath of Lee's surrender and then goes on to narrate the horrendous events of five days later when, on April 14, Lincoln is assassinated. After chronicling Lincoln's poignant funeral, the series recounts the final days of the war, the capture of John Wilkes Booth and the fates of the Civil War's major protagonists.

The episode then considers the consequences and meaning of a war that transformed the country from a collection of states to the nation we are today.

***** The African Americans: Many Rivers to Cross

Downloading Seeding PBS.The.Civil.War.by.Ken.Burns.9of9.The.Better.Angels.of.Our.Nature.720p.HDTV.x264.AAC.MVGroup.org.mp4 from to 0 peers.
of
↘0 b/s / ↗0 b/s
Read our blog post about Streaming Torrents From Your Browser