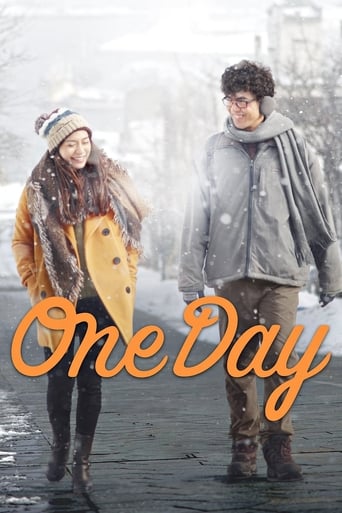 Denchai is a geeky 30-year-old IT officer whose existence is only acknowledged when his colleagues need tech support. Denchai's mundane world is flipped upside down when he meets a new girl in the Marketing department named Nui, who makes him feel valued once again. Denchai wish for Nui to be his girl for just one day. During a company trip, Nui has an accident and wakes up with a temporary memory loss disorder, which lasts for just one day. Denchai decides to lie to his dream girl by telling her that he is her boyfriend and that they had plans to travel around Hokkaido together. Would you risk everything, just to be in love for just one day?

This is a story about an IT worker called Denchai who doesn't get along with his co-workers well.He falls in love with one of his co-worker who he thought wasdifferent from others called Noui| apparently| the person is an adulterer with her boss who is already married. Then one day| they all went on a trip to Japanand at the end of the trip| Noui decided to commit suicide due to recently discovered that her boss will not get a divorce with his wife but failed and resultedin her losing her short term memory for a day. Denchai then decides to put this opportunity to good use by telling Noui that they are in love.

**A neverday tale.** From the director who is famous for great horror flicks, but I liked his only romance-drama 'Hello Stranger' that starred by the same actor as in this one. This is a similar type, I mean a travel based romance-drama, but a fraction amount of fantasy and/or sci-fi influenced. Due to the way the tale was narrated, it makes no sense to label it with them. It also looks kind of the 90s style romance films from the west. So a bit old theme, however, surprisingly it worked out for me. The concept was as same as 'A Few Portion Missing in the Centre', but it is entirely a romance-drama. When I started to watch, I thought it was going to be an average, the scenes could be predictable, but most of the film was like that, until the twist came at the midway. It was not about the twist, because that kind of twist was used in the films since the inception of the cinema. Not about what followed after that, thought those parts were decent. But the ending, that was different which saved the film I say. If the climax was compromised, the film would have lost its charm. If I were only young like a teenager or in the early 20s, it would have been my favourite film. You know, 'been there, done that' kind mindset makes not to fall for the familiar appealness/sentiments. So I'm not the target audience, but those who are, would surely celebrate it. Particularly the girls. Yet still be a watchable film by everyone, despite how much you are going to like it. > ❝It's like we're climbing Mt. Everest together.❞ The story of a 30 year old geek, Denchai, who works in an IT firm as a tech supporter. He's a perfectionist, but all he wanted was people around him recognise his presence, but nobody does. He develops a crush on a new co-worker, but he keeps it himself by stalking since she's seeing somebody else in the office. Then one day when the company takes its employees to oversea tour, his wish comes true to be her boyfriend for just one day. So the entire day was narrated for us how they made it, and following day what happens, all were revealed. The initiation was a bit longer than I anticipated. It was necessary to make a perfect riddle for what comes in the later. But when they go foreign trip, everything changes, a different kind of film in front of us. Like any normal romantic-drama, the best parts can be expected. Those who have watched hundreds of romantic films, would feel a bit cliché, but worth it. Then moving towards the final stage, you might think you know what would happen, though the film reaches its highest point with a better conclusion rather going for ideal one. The two lead actors won the Thai Academy Awards for their performances. I think they deserved it, at least for the Thai film standards. One more awesome film by the director. I think he should do more romance films, besides his favourite, horrors. Nicely used the Japanese locations to narrate the tale. The dialogues were okay, but the emotions should have been a little more stronger. Especially for this kind of ending. But anyway, I liked it mainly because of that part. One of the best Thai romance films in the recent time. So if you are looking for a pure, touching romance film, this is the one to pick. _7/10_