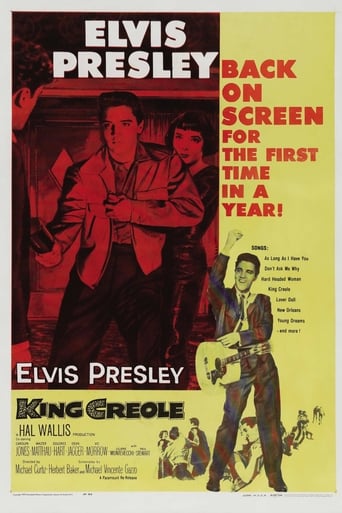 Danny Fisher, young delinquent, flunks out of high school. He quits his job as a busboy in a nightclub, and one night he gets the chance to perform. Success is imminent and the local crime boss Maxie Fields wants to hire him to perform at his night club The Blue Shade. Danny refuses, but Fields won't take no for an answer.

A rebellious young man takes a job as a nightclub singer to make ends meet| attracting the attention of a local crime boss. Elvis Noir as Rock N Roll comes to the King Creole. King Creole is directed by Michael Curtiz and adapted to screenplay by Herbert Baker and Michael V. Gazzo from the novel A Stone for Danny Fisher written by Harold Robbins. It stars Elvis Presley, Carolyn Jones, Walter Matthau, Dolores Hart, Dean Jagger, Vic Morrow, Paul Stewart and Jan Shepard. Music is scored by Walter Scharf and cinematography by Russell Harlan. Plot finds Presley as Danny Fisher, a high school student struggling at school who falls in with the wrong crowd just as family matters of the heart start to take a hold. He said anybody that disagreed with you got a punch in the mouth. Is that what I brought you up to do, to fight? The last film Presley made before going off to do his service in the army, King Creole is his best film. It's one of only a small handful that showed the star actually had some acting ability, here he gets a top director to work under and a very tidy cast put along side him for him to respond too. Presley immediately warmed to Curtiz (Casablanca/Mildred Pierce), wilfully doing as he was told by the wily old director, rewarding the film fan with a performance of some merit. Presley would often say it was his personal favourite of his own films, and it's not hard to see why. Though packed with musical numbers, many of them belters as well, the film always stays dramatic, in fact the tunes form part of the narrative, they are not frothy interludes slotted in purely for fan appeasement. Everything he touches turns to drink. It's not unreasonable to expect King Creole to be a fun movie, the kind where Elvis flies a plane, speeds around on power boats, or saves the word during a treasure hunt, because the poster art and DVD covers lend you to think that. Honestly, one shows the King with guitar wrapped around him, hips bent and a huge smile on his face, the other has the same Elvis pose but along side him is a smiling beauty bedecked in a banana patterned dress! I mean really, would you think this film is shot in moody black and white, features murders, theft, family upheaval, drunks, knife fights, wasted life and all round dirty tricks? That the King is snarly, aggressive and channelling Jim Stark from Rebel Without a Cause? Because all these things reside within this potent and most agreeable Elvis picture. Now you know. That's how you get into it. With the drama relocated from the New York of the novel to Bourbon Street New Orleans, and Danny Fisher changed from a boxer to a singer, atmosphere needed to be tight to the emotionally battered story. And it is, very much so, with Harlan (Ramrod/Riot in Cell Block 11) doing a great job of making The Big Easy come off as The Big Seedy. This is a world of back alleys where hoodlum youths dwell and of wet tinged streets barely lit by gas lamps, many of the night scenes shot here are worthy of film noir status, with a rain sodden mugging sequence truly top of the line. Conversely Curtiz also paints a bustling Orleans picture, with song clubs and street sellers proving to be the heartbeat of the city. It's a twin viewpoint of Orleans that matches other duality themes that drive the narrative forward, because Danny is caught between two girls and two night club owners. Cast are very good across the board, with Matthau menacing, Morrow weasel like, Jagger and Jones sad and pitiful, Stewart elegantly honest and Hart doing a neat line in confused love. Stand out tunes include the title song, "Hard Headed Woman", "Trouble", "Steadfast Loyal and True", "Lover Doll" and the quite beautiful "As Long As I Have You". It's not perfect, serious crime goes unpunished, the main motive driving on Matthau's club boss is rather weak and the two love interest girls are written lazily as love sick puppies. Yet this is still a cracker of a movie, where Presley bristles with magnetism and emotional conflict and Curtiz and Harlan rack up the requisite amount of impressive atmospheric visuals. 8/10

Downloading Seeding King.Creole.1958.720p.BluRay.H264.AAC-RARBG from to 0 peers.
of
↘0 b/s / ↗0 b/s
Read our blog post about Streaming Torrents From Your Browser