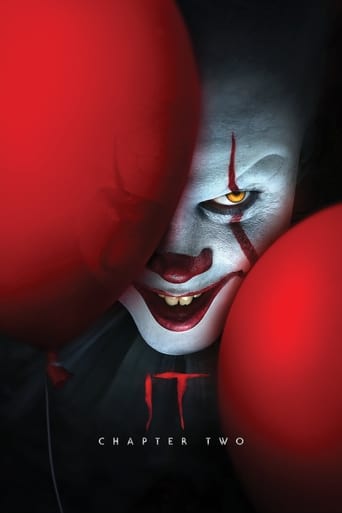 27 years after overcoming the malevolent supernatural entity Pennywise, the former members of the Losers' Club, who have grown up and moved away from Derry, are brought back together by a devastating phone call.

Defeated by members of the Losers' Club, the evil clown Pennywise returns 27 years later to terrorize the town of Derry, Maine, once again. Now adults, the childhood friends have long since gone their separate ways. But when people start disappearing, Mike Hanlon calls the others home for one final stand. Damaged by scars from the past, the united Losers must conquer their deepest fears to destroy the shape-shifting Pennywise -- now more powerful than ever.

‘It Chapter 2’ isn’t as stable or as refined a film as its predecessor, and while it feels lacking by comparison, it’s still far better than most studio horror films. It’s epic, ambitious, crazy, witty and unafraid to go for the heart as well as the throat. As a whole, this adaptation of maybe Stephen King’s greatest work feels singular in the landscape of modern horror cinema: two films built on strong interconnected relationships spread over decades, as sentimental as they are vicious, and executed on the scale of a fantasy epic. They also may be amongst the best adaptations of King’s work, understanding what makes his writing (and this novel in particular) so horrifying and so arresting, the human horror amongst the fantastical. Andy Muschietti aimed big with ‘It’, and even in the moments its reach exceeds its grasp, you’re still so glad it reached so high in the first place. - Daniel Lammin Read Daniel's full article... https://www.maketheswitch.com.au/article/review-it-chapter-2-the-ambitious-conclusion-to-the-beloved-horror-epic

It's the love story between Richie and Eddie that makes this movie worth viewing twice. Looking forward to the conclusion!

A pretty odd choice too undercut every scare in the movie, but I was less disappointed with _Chapter Two_ than everyone else seems to be. I gave it the same star rating as the first Muscietti _It_ movie, but if I'm being honest, that one was definitely better. Doesn't make this bad though. _Final rating:★★★½ - I really liked it. Would strongly recommend you give it your time._

Wasn't a huge fan of the first but did like the young cast but the scares were non-existent. This sequel had a couple okay moments and I did like the characters as adults, but Bill Hader easily was the standout. Still wasn't very scary yet even with the lengthy running time never felt like it dragged. One day I may try watching the two back to back, but between the two, not overly impressive. **3.5/5**

“You lied and I died!” Making us proud Georgie. I re-watched the 1990 mini-series and 2017 remake last month in preparation for this movie in terms of judging in quality. The 90's version had it moments, but I find some scenes unintentionally funny where it reeked of early Stephen King adaptations. 2017 was surprisingly good and a massive improvement, but laid back on cheap thrills. ‘IT: Chapter Two’ was a tough act to follow up on after the monster success of the first and with the second chapter being the hardest to adapt. I thought the movie both succeeds and stumbles in parts. Although reflecting back makes it feel more like a parody than a serious horror movie. An epic finale that ended in a over the top fashion - with themes of childhood trauma and the idea of holding on to the past despite growing up with age are sprinkled through out. The loser club are all grown up now and returning home to kill IT. Whoever cast the grow up version of the loser club deserves massive praise here, because it’s pitch perfect casting and I could definitely see the child stars growing up to be the adult stars. James McAvoy, Jessica Chastain, Jay Ryan, and Isaiah Mustafa were all great in bringing the more dramatic aspects to the film. While Bill Hader and James Ranson bring the comedic aspects, but not to say they weren't dramatic as well, even making me tear up at one point. Bill Skarsgard was truly amazing as Pennywise. The physicality in his movement has a certain silliness that you would expect to see from a clown, yet predatory with his animal-like attacks with drool running down his mouth and eyes staring in opposite directions despite looking straight at you. I find the dancing clown incredibly terrifying whenever he becomes playful and kind to deceive children. Andy Muschietti truly shines as a director when it comes to bizarre imagery and unsettling camera angles, while also capturing some real emotions through the lens. The opening scene at the bridge where a homophobic attack takes place was really brutal and starts the movie off strong - on par with the Georgie meets Pennywise scene in the first movie. Despite the run time being nearly three hours long, but I can’t recall ever being bored. It moved at a even pace in my opinion. I guess a few scenes could’ve been cut as most of it is unused footage from the first movie. Although it would be difficult to cut scenes as everything follows up to the next scene and that emotional punch towards the end wouldn’t be earned. Now for the issues: Henry Bowers was completely pointless in this movie and was only used for jump scars. Same thing with Mike, who through out these movies has nothing to do and the important things he did in the book was given to different characters. I didn’t like how Stan’s suicide was handle, because you find out he actually “sacrificed” himself to save the others. Some of the humor didn’t always land, especially if it’s right after a tense scene where it kinda deflates the horror. At times I struggled to gasp what the film marker was going for in certain scenes. Is this scene suppose to be scary or funny? Both maybe? I wish there was more practical work for the monster scenes instead of CGI, because at times it looked really terrible. The finale battle at the end could’ve been in a video game boss fight. * Overall rating: Not as strong as the first, but still enjoyed it. Still, let’s kill this f**king clown.**strong text**

It's been a while since I've read the book or seen the first movie; so I apologize if I get some things wrong.TLDR; The film drags on in the middle by splitting up the crew and subjecting them to meaningless jump scares. This means little character interaction (which is part of what the first movie had going for it). By the time you get to the final confrontation with Pennywise, you're just tired of the jump scares and want it to be over because you're not really rooting for the losers. And if you are, it's mostly because of what was established in the first film.Pros: The film starts off great. Somehow the scene at the bridge manages to match the iconic opening scene of the first.Skarsgård is an amazing Pennywise and is creepy as hell.Stan's speech in Richie's second flashback is great and actually funny.Casting is, for the most part, really good. I think it was hard for some of the adult actors to find a balance between being recognizable while still showing how they've matured over time. Adult Richie is too kid-like while Bev is too mature to the point of being unrecognizable.Cons: Bowers is half-assed. Literally just used for three jump scares and nothing else. Either imply that he died and leave him out or fully use him like he is in the book as the epitome of the corruption in Derry.The final form of Pennywise is unsatisfying. It's literally a clown torso on some sort of arachnid body. They needed to go full arachnid alien like it is in the book. I think this part is just difficult to translate from the book though.Stan's letter at the end cheapens his death. Instead of him literally being unable to handle his fear of IT, his suicide is portrayed as a sacrifice to save the others.There's next to no character development and very little meaningful interaction between characters. I blame this mostly on the middle 90 minutes where they all split up. It's totally different from the first film where they are actually a team.Speaking of which, this part where they all go their separate ways to find their "tokens" is so contrived. The story literally loses all its steam due to this and makes it feel way too long.All of the monster scenes except the ones with Pennywise have terrible CGI. They might be gross and/or startling but you can see them coming and they don't contribute much.About 1/3 to 1/2 of the jokes just kinda fell flat.The constant jump scenes and long running time just make this movie exhausting to watch. It was just a constant cycle of "pan to character, give a little backstory, jump scare, repeat".

I really, realllly wanted to like this film. As a huge fan of the original mini-series (and EVERYTHING Tim Curry), I knew I'd have a challenge going into both Chapter 1 and Chapter 2 with an open mind. I had to separate. I didn't have as high of expectations as I did for Chapter 1 as Part 2 of the mini series was much weaker than the Part 1 anyway as well as Stephen King's It (Book).The actors were great. Even the first few jump scares were decent, and then it just became overkill. And not scary whatsoever. All of the CGI monsters look ridiculous and completely take you out of the moment. I grew up watching 80s/90s horror (AND LOVING IT). The baddies were REAL and TERRIFYING. For example, Mrs. Massey, the bloated bathtub corpse in The Shining. That was a real, completely horrifying image that has stayed with me 30 years after I First saw the movie. I don't understand the obsession with CGI when there's no need for it.Sadly, this movie was just a drawn out bore.

I'm a big baby when it comes to scary movies and even I can say I wasn't scared. The jump scares were alright but the CGI monsters just made the movie feel immature. Also....Pennywise is a flesh eating clown with hypnotic powers.....and they bullied him to death to defeat him. It was just such a corny scene watching pennywise shrink as they say mean things to him lmao