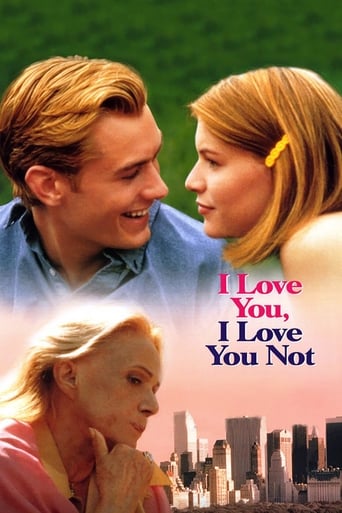 School student and her European-born grandmother share sad stories of their lives.

Prep school student Daisy and her European-born grandmother Nana share the sad stories of their lives: Daisy tells Nana of her romance with young Ethan and problems in school because she's Jewish; and Nana tells of her young years under Nazis when she was sent to ghetto and then to concentration camp. 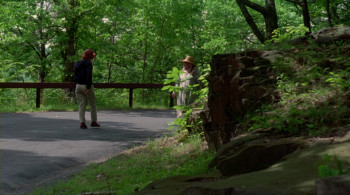 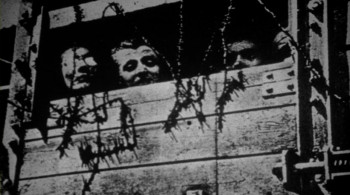 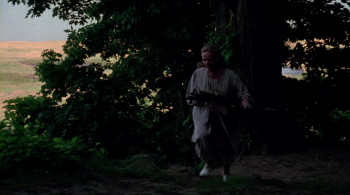 Sad, strange little movie stars Claire Danes as Daisy; a shy, bookish girl attending an elite private school in New York. When she's not gushing over the delectable Ethan (Jude Law), she's spending time with her Nana in the countryside reading books and listening to Nana's tales of her survival of the holocaust.The movie tries to intertwine the themes of post and modern day anti-semitism via Nana's stories and flashback sequences with Daisy's trials and tribulations at school when knowledge of her Jewish heritage is made public.Unfortunately, as hard as this movie tries, it never quite hits the mark. The performances from Danes and Moreau though are heartfelt, and the message is there for those who want to see it. This movie means well and attempts to educate us on one of the all time greatest blights on mankind - prejudice.Worth a look for early performances from Jude Law, James Van Der Beek and Julia Stiles before they hit the big time.

Well, this is certainly a fast forward movie to be rented, with many parts that could be zapped past.It does explore how one grows up and deals with the pains of youth, and surprisingly, it does end with a splash that isn't expected, yet makes sense in review the movie.It's certainly worth seeing along with a field trip to the Simon Wiesenthal Center in Southern California to understand the background of the story and to get a better grasp of the complexities of emotions that many have to deal with even today.But it isn't a movie that is very deep nor giving. The viewer is left sitting there with the ending, and yet wondering why bother as the movie does deliver fully in engrossing the viewer and placing them into another world. It is a third person movie and you are that 3rd person -- a casual observer never to really enter.A first draft, by a child, compared to Schindler's List.

I am so angry at this film that it will be very difficult for me to contain the harsh words that are ready to spew from my mouth. This will not be a review for young readers. I Love You, I Love You Not was an atrocity from beginning to end. From both the disgustingly poor editing, to the sloppy acting, all the way to the horrendous themes that seemed to plot two random events together this film screamed "After School Special". In fact, now that I think about it, "After School Special" would be too delicate of a summary, it instead felt like a eager undergraduate film student attempting to be smart by attempting to poorly summarize the Holocaust with the turmoil of being a high school student. Hopefully the professor of this assignment saw the project and properly gave it the "F" it deserved. Hollywood completely outdid itself on this doozy of a film. I am surprised that the Jewish community didn't find this film offensive in the way that it trivialized the events of the Holocaust and compared them to the social troubles of a High School girl. I was upset by this occurrence, and I am not even Jewish. After this short film viewing, I felt dirty, upset by the Hollywood community, and ready to shout obscenities at everyone involved with this project. I Love You, I Love You Not was just another Hollywood attempt to monopolize on Claire Danes' My So-Called Life popularity while trying to be overly symbolic by involving the Holocaust. Is anyone else as sick as I am about this disgraceful marriage? I do not understand at all what director Billy Hopkins was attempting to convey with this film. The themes were muddled in a slew of choppy editing and horrid flashbacks that left my mind in a confused knot. In one instance we had Danes unwilling to spend time with her grandmother, while in the next instance she was opening up everything in her life to her, while in the next she was making out with the mirror, and suddenly in the next she was asking Moreau to tell her a nightmarish bedtime story involving Robert Sean Leonard. Wouldn't that give anyone nightmares? It did give everyone nightmares and preempts our next step into the randomly anti-Semitic High School in which Danes attends. Unlike other films that use the Holocaust to show the injustices of the world, like in School Ties, this film randomly interjects the anti-Semitic moments near the end as if only to help strengthen already dead climax. Like nearly every scene in this film, the supposed "high-points" come and go nearly as quickly as modern fashion, leaving the viewer with nothing at all. I walked away of this film with an embarrassed look. While there may have been some attempt at meaning behind Billy Hopkins' camera, what eventually was released was a childish attempt to combine the trivial life of a High School girl to that of the monumental disaster known as the Holocaust. Could you put these two together? A great director probably could, but Hopkins' could not. All that it seems that he wants to create are meaningless dramatic plot-holes coupled with beautiful people.Which, ultimately, leads me to the acting. While "abhorrent" would be a light word summarizing the purely absent acting of Danes, Law, and Van Der Beek, it is the only one that I could think of. Danes, using the same character structure from My So-Called Life in this film, could not find her way out of a paper bag if she tried. I could hear Hopkins in the background saying, "Give me more Angela Chase, I hired you for Angela, I WANT ANGELA". Her character is all over the place, manic depressive in one moment, happy the next, chaotic throughout, pitiful entirely. I loved the fact that she was a "reader", but one of the most ignorant characters created. You would think that with all the books she would have learned from them, sputtering quotes throughout the film, but alas, that never happened. Again, we were left with only Angela Chase. Award winning Jeanne Moreau bounces of the non-existent acting of Danes by providing her own character which does not fit into this film. Obviously disturbed by her time in Auschwitz, Moreau never develops this. She allows Danes to walk all over her, creating a weak grandmother and a needy, spoiled granddaughter. Throw in "boy-toy" Jude Law only for looks (because his character was as transparent as Saran wrap) and you have the worst cast in cinema. Nobody did any work with their characters, but instead walked around the set happy to be earning some, if any, money for their roles. I am surprised that both Danes and Law were able to pull themselves out of the I Love You, I Love You Not rut.Overall, this was a confusing film that was only proved worse by torrential acting, very ill cinematography, a hasty Hollywood story (very obviously created by the infamous recycle machine), and by combining a trivial moment in a teenager's life with the historical hardships of the Holocaust. That would be similar to me trivializing the horrible deaths on the beaches of Omaha with me not getting a date for my Senior Prom. That just is painful to hear and visually see. The acting was non-existent, but obvious ploys to get a younger audience to attempt to connect with the story. The direction was nauseating. The constant flicking between present day and past stories kept me dizzied for days afterwards. Then, there was the uproarious casting of Robert Sean Leonard, I couldn't help but laugh when I continually saw him on screen. The only actor worth mentioning in this film was Julia Stiles, but that was because she kept her mouth shut. This was a disaster from the beginning and should be forgotten by all! Grade: * out of *****