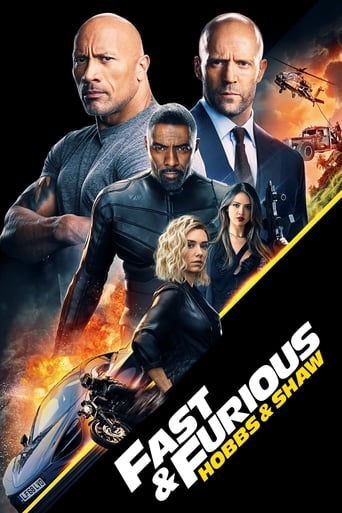 Ever since US Diplomatic Security Service Agent Hobbs and lawless outcast Shaw first faced off, they just have swapped smacks and bad words. But when cyber-genetically enhanced anarchist Brixton's ruthless actions threaten the future of humanity, both join forces to defeat him. (A spin-off of “The Fate of the Furious,” focusing on Johnson's Luke Hobbs and Statham's Deckard Shaw.)

By this point in the franchise, ‘Fast & Furious’ fans will know exactly what to expect from ‘Hobbs and Shaw’, and there’s just enough here that's fresh enough to warrant taking another ride with the series. - Ashley Teresa Read Ashley's full article... https://www.maketheswitch.com.au/article/review-fast-and-furious-hobbs-and-shaw-very-furious-not-so-fast

I generally really enjoy the Fast and Furious movies and was looking forward to this spin-off, especially being directed by David Leitch, but nothing in this stood out action/stunts-wise and the chemistry between Johnson/Statham/Kirby was lackluster, including the quasi-budding romance with Johnson and Kirby. A lot of this film felt forced and going in the science fiction realm just felt wrong. Sure, it's got the dumb elements F&F is known for, but very little of this was fun. **2.75/5**

Yeah, sure, fuck it, why not, hey? I mean the _Fast & Furious_ franchise was already dipping into some sci-fi elements, why not just whole-hog dive into it for your spinoff? Dumb as dogshit, but might genuinely be the best thing _Fast & Furious_ has ever produced. Has cars in it, but stops bothering to try and pretend racing them is actually important to the story. _Final rating:★★½ - Had a lot that appealed to me, didn’t quite work as a whole._

Last night I took my sons to a preview screening of Hobbs&Shaw, and it is exactly what you would expect. A lot of action, fights, chases and an overload of testosteron. And there's nothing wrong with that. Sure, if you start nitpicking, there are some flaws in continuity and all, but this is not the kind of movie that needs to be nitpicked. We had a great time, my boys loved their first midnight preview. To me, that's all that counts.

The movie really live up audience expectation. It's dumb, ridiculous,fun, and crazy too. This why audience watch this kind of movie because of its entertainment value. The movie really offer audience a lot this time. You got Dwayne Johnson and Jason Statham bicker all the time like husband and wife, ridiculous action sequence, and powerful family theme which I think very relatable for some audience. The movie also have surprise appearance by some popular actor which I think gonna get people excited more. Overall, it's very enjoyable dumb flick action movie that definitely live up our expectation

I got to see an early preview on Tuesday night which was cool. I have seen all the fast and furious movies and although I understand the appeal and like the characters I felt like the movies became increasingly ridiculous with the writing as time progressed.While I think most people can probably agree with me on that point, my bigger issue was the over serious tone in conjunction with the movies. It is as if everyone in them is in denial that the stories were becoming increasingly ridiculous.This movie however takes a different approach. I think Dwayne and Jason get the appeal and ran with it while subtly acknowledging and making light of the over the top nature of the story. This is possibly my favorite entry, even though I do like the first few movies in the series and would like to see if they could apply this tone to the main series if it continues in any way.One final thought, if you like the pg-13 Deadpool 2 "once upon a Deadpool", and like fast and furious then you are gonna love this one. I won't say anymore than that but I think you will see what I mean. Make sure to stay for the credits scene too.