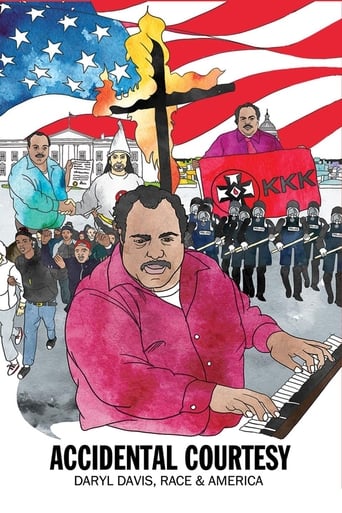 Daryl Davis has an unusual hobby. As a musician he has played with legends like Chuck Berry and Little Richard, but in his spare time he likes to meet and befriend members of the Ku Klux Klan. Join Daryl on his personal quest to understand racism.

Daryl Davis is an accomplished musician who was played all over the world. He also has an unusual hobby| particularly for a middle aged black man. When notdisplaying his musical chops| Daryl likes to meet and befriend members of the Ku Klux Klan. When many of these people eventually leave the Klan with Daryl'ssupport| Daryl keeps their robes and hoods; building his collection piece by piece| story by story| person by person| in hopes of one day opening a museum ofthe Klan. Downloading Seeding Accidental.Courtesy.Daryl.Davis.Race.and.America.2016.1080p.WEBRip.x264-RARBG from to 0 peers.
of
↘0 b/s / ↗0 b/s
Read our blog post about Streaming Torrents From Your Browser